The Dalai Lama’s deep interest in scientific knowledge that intersects with the spiritual aspects of Buddhism will bring him May 21-22 to the University of Wisconsin—Madison, one of the world’s foremost centers on emotion research.

Nobel Peace Prize Laureate Tenzin Gyatso, the 14th Dalai Lama of Tibet, will be on campus for a special conference organized by Richard Davidson, UW–Madison professor of psychology and psychiatry, and co-sponsored by the HealthEmotions Research Institute of UW–Madison’s Medical School and the Mind and Life Institute of Boulder, Colo.

Titled “Transformations of Mind, Brain and Emotion,” the conference will examine how practices such as meditation influence brain function, emotions and physical health.

To be held in the new W. M. Keck Laboratory for Functional Brain Imaging and Behavior and the Fluno Center, the meeting will bring together a small international group of scientists who are leaders in this field of research. Another featured guest will be Matthieu Ricard, a French molecular biologist who has been a Buddhist monk for 20 years and is the author of “The Monk and the Philosopher.”

Ricard has agreed to participate in research during his visit. He will undergo brain scans at the new imaging laboratory. The results of the imaging will be compared with that of other research subjects to help determine whether a disciplined practice such as meditation can elicit brain changes.

Davidson, co-principal scientist at the HealthEmotions Research Institute, says the conference will also focus on a brain imaging project with other volunteer monks. The Dalai Lama is deeply interested in the UW research, says Davidson, especially in new studies suggesting that people can change their emotional makeup to overcome depression and harmful emotions.

The scientists and the Buddhist spiritual leader seek answers to the same fundamental question: What are the pathways to a happy and healthy life?

“He has actually quoted a lot of our research in his speeches and writings,” says Davidson, referring to the Dalai Lama’s most recent book, “The Art of Happiness.”

“He talks about how happiness is not a fixed characteristic but is a product of our brains that we can change,” Davidson says.

The Mind and Life Institute, on whose board of directors Davidson serves, is the formal sponsor of the conference. The institute was created to foster dialog between the Buddhist tradition and Western science by exploring research areas where interests of the two worlds intersect. The biennial conferences have dealt with topics such as the mind-body relationship; altruism, ethics and compassion; and new fields such as quantum physics and cosmology.

At the Madison conference, the Dalai Lama will be both observer and participant, interacting closely with the scientists who will give presentations. In addition to Ricard, presenters include Davidson; Francisco Varela, a neuroscientist with Salpetriere University Hospital in Paris; Paul Ekman, of the University of California, San Francisco; Jon Kabat-Zinn, mindfulness meditation expert and author of “Full Catastrophe Living”; and Ned Kalin, HealthEmotions Research Institute director and UW Medical School psychiatry department chair.

Davidson has attended several Mind and Life conferences. At last year’s meeting in Dharamsala, India, he formally invited His Holiness to come to Wisconsin to see first-hand the university’s new brain imaging center. Davidson was surprised and pleased when the Dalai Lama accepted his invitation.

“He has a tremendous respect for science, and very much believes that science is the principal currency of modern culture,” says Davidson. “It is truly amazing that someone of his stature and world standing would commit to spending two days here.”

Included in his Madison visit will be a tour of the W. M. Keck Laboratory for Functional Brain Imaging and Behavior, a new state-of-the-art facility at the Waisman Center that will focus exclusively on behavioral neuroscience research. It will serve as the nerve center for the HealthEmotions Research Institute, which will apply the technologies to answer questions that may help prevent disease and promote better health. 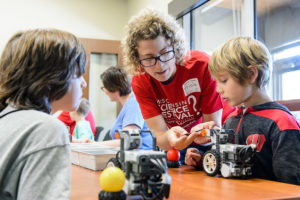