Teachers, along with physicians, show the highest levels of stress amongst all professionals, with high rates of turnover that pre-exist the COVID-19 pandemic.

Researchers at the Center for Healthy Minds (CHM) from the University of Wisconsin-Madison developed a four-week smart phone-based meditation app that resulted in reduced psychological distress and improved well-being skills in over 660 Wisconsin school system employees, with implications for employee retention, performance and student outcomes.

Teachers play an important role in education outcomes. Among the strongest predictors of student achievement, says Matthew Hirshberg, lead author of the study, is the quality of the relationships teachers and students develop. Teachers who are highly distressed tend to have worse quality relationships with their students.

“Supporting well-being seems like a good place to try to approach improving teacher-student relationship quality”, says Hirshberg. “CHM has a history of doing research with teachers and students to support well- being. And given the challenges teachers were facing and continue to face during the pandemic, this was work that felt timely and important.”

"CHM has a history of doing research with teachers and students to support well- being. And given the challenges teachers were facing and continue to face during the pandemic, this was work that felt timely and important."

The modules included instructions and narrations in formal sitting meditation and active meditation or informal practices that can be easily integrated into one’s regular daily routine. For example, using dishwashing as an opportunity to transform a chore into appreciation for what you have, or kindness towards the people whose dishes you are washing.

The main takeaway of the study, says Hirshberg, is that the intervention appears to be very effective at improving mental health and well-being. “We basically saw on every outcome we assessed that educators who were assigned to the HMP had significant benefits compared to the control condition (no intervention) and that those benefits were sustained three months later.”

School system employees that participated in the HMP showed significant reductions in psychological distress, which was sustained three months after the intervention.

“These are hopeful findings as they suggest that short simple mental exercises can make a big difference in the mental health and well-being of teachers and suggest that such practices can be easily scaled.”

Richard J. Davidson, Founder and Director of the Center for Healthy Minds

Participants also showed improvement in well-being skills such as mindful action, self-compassion, cognitive defusion (not getting caught up in thoughts), social connectedness, presence of purpose and meaning, along with reductions on depression and anxiety symptoms and increased overall well-being. This also persisted for three months following the intervention.

These results present strong evidence for the efficacy of the intervention, says Hirshberg.

Hirshberg explains that these types of meditation practices might have the capacity to shift the way you perceive your experience. This means that even when your day to day activities might not be that different than they were before the training, you've begun to train your mind to handle experiences in a different way and transforming the way you're relating to them.

“That's a powerful, powerful possibility, that these sorts of trainings can shift the way we're dealing with what we're facing,” says Hirshberg. His hope is that, with this type of intervention, a paradigm shift will occur so that teacher training and professional development includes promotion of well-being and the basic skills that underlie it.

“These programs (HMP) also support teachers in becoming better teachers. Teacher mental health and well-being is not unrelated to their ability to effectively teach,” says Hirshberg.

The accessibility of smartphone-based meditation makes it easier to be included in an educator's daily life. However, Hirshberg says the next study should be done during the school year, once teachers have more responsibilities on their plates.

Another future approach, says Hirshberg, is looking at whether there is a relationship between teachers participating in the intervention and the educational outcomes of their students, potentially influenced by better teacher performance or increased job retention that provides students with stability. 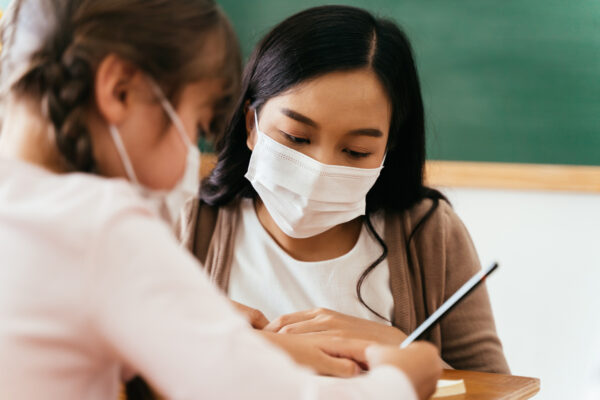 These interventions also have the potential to reduce bias-based disparities in educational outcomes. Small studies have shown that when teachers hold an automatic negative association with one race of students versus the other, those students are more likely to perform worse than the other group of students.

“There's also some evidence that mindfulness and meditation-based interventions actually reduce those forms of bias,” says Hirshberg. The link is yet to be made in a school context.

Systemic issues such as high rates of teacher turnover, particularly seen in schools that have a higher proportion of disadvantaged students, are other areas Hirshberg hopes this intervention could be beneficial for. Richard Davidson, Director of the Center for Healthy Minds where this study was conducted and one of the study authors, notes that “These are hopeful findings as they suggest that short simple mental exercises can make a big difference in the mental health and well-being of teachers and suggest that such practices can be easily scaled.”