Charles Raison considers himself the “ultimate retread guy” because of his research on ancient practices to help with health conditions of the modern world.

As a clinical psychiatrist, researcher and Center for Healthy Minds faculty member, Raison approaches mental health treatment from a historical yet modern perspective: How can we hack the evolutionary history wired in our bodies with today’s scientific tools to relieve symptoms of mental health conditions and promote well-being? 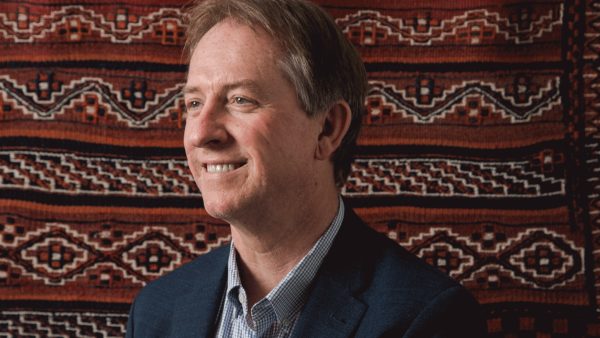 Raison’s early research interests took root in the late 1990s during a discussion with Lobsang Rapgay, Ph.D., a psychologist, former Tibetan Buddhist monk and collaborator at the University of California, Los Angeles.

“We were discussing Tummo, which is a meditation practice designed to intentionally increase one’s body temperature to achieve intense positive mental states,” Raison says. “And it occurred to us: Why would people spend years trying to manipulate their body temperature as a primary means of changing their mental state? What we realized through subsequent research is that the same systems in the body that regulate temperature overlap with systems that regulate mood, which likely explains why altering these thermoregulatory pathways holds promise as a way to positively change the brain."

It occurred to Raison and his team that heat might have an antidepressant side, a shared pathway where heat acts as a deep brain stimulator. They hypothesized that being warmer could put the mind in a state of prosocial, open and inspired well-being – states that tend to be antidepressant in nature.

The idea of using heat to improve mental states is evident across time and culture – from saunas and sweat lodges, but has not been examined much scientifically.

"Why would people spend years trying to manipulate their body temperature as a primary means of changing their mental state? What we realized through subsequent research is that the same systems in the body that regulate temperature overlap with systems that regulate mood..."

Raison got the chance to jumpstart research in this area while teaching in Austria in 2010 when students attending a lecture shared the idea of looking at the effects of an unused hyperthermia chamber stored in the basement of an alternative medicine psychiatric hospital in Switzerland. They looked at the effects in a peer-reviewed open trial of 16 study participants and found that hyperthermia cut their depression symptom scores in half one week after a single treatment.

Despite being promising, this first study had no placebo, so the possibility that other factors may have accounted for the findings could not be dismissed. To address this, Raison and collaborators pressed forward doing a small randomized, placebo-controlled study at the University of Arizona, looking at the effects of hyperthermia in people with depression.

This study confirmed that raising people’s body temperatures to the equivalent of a mild fever improved their symptoms of major depression for as long as six weeks after a single treatment.

Raison and the team also took blood samples from participants in the study, and learned that hyperthermia seemed to increase a certain immune responder called interleukin-6, which has been associated with a number of medical and psychiatric diseases as a result of its association with inflammation.

But in this case, The short-term increase in interleukin-6 following hyperthermia actually seemed to contribute to the treatment’s antidepressant effect.

Raison says finding ways to provide short-term immune stimulation may be an effective treatment for many people living with depression.

“If you look at some – not all – people with depression, they have chronically elevated inflammation. We’ve made this argument, as others have, that this may be an evolved, adapted mechanism, and that part of the reason why depression came into being was that it grew out of sickness,” Raison explained in an interview with Found My Fitness. “When someone was sick, the immune changes that become activated and produce depression are known to help survival. And many of the symptoms of depression, like sickness, helps conserve energy for fighting the infection and/or cause people to withdraw, which protects them from further infection to which they are liable when sick.”

Raison says there’s still much more work to do before making generalized claims about the effects of hyperthermia.

In the future, he hopes to conduct additional studies on the immune system and hyperthermia with more accessible technology approved by the U.S. Food and Drug Administration, including infrared saunas.